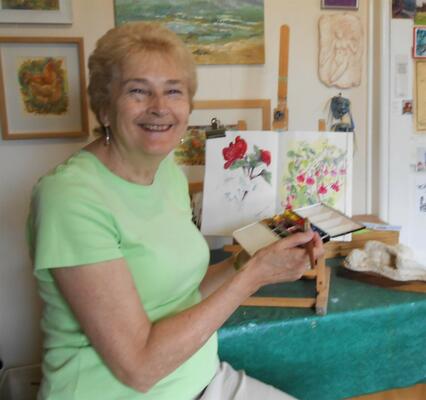 Elected as a Member of a National Society, the United Society of Artists. I annually exhibited with the Society firstly at Westminster Hall and later at The Menier Gallery and Bankside Gallery in Central London from 1997 until the Society's demise in 2019. In 1995 I joined Herts Visual Arts and since that date I have participated in the annual OPEN STUDIOS event.

I ran workshops and gave demonstrations for Art Societies in Herts, Middx, Beds and Bucks for 20 years until 2019. My desire to encourage, inform and inspire remains undiminished and so I continue to run workshops from my home studio in Oxhey three times a year. Spring and Autumn workshops are 'paint along' in style whilst the Summer workshops are held in my cottage garden which is a wonderful resource (weather permitting.) Private tuition in watercolour is also given to adults of all ability.

For many years watercolour has been my first love. Nowadays this is often combined with other media or collage to create textural effects. Sculpture in stoneware fired clay is also a passion of mine, these pieces, taken from life and imagination are suitable for the home and the garden.

A deep love of nature is reflected in colourful paintings in watercolour, mixed media, oils and acrylic. Favourite themes are landscape, coastal scenes, gardens, figures, animals and birds and still life . I regard experimentation as important in order to move forward.

In 2007 a watercolour was purchased by Bushey Museum, Herts for their collection of work by local artists.
In 2010 a depiction of Watford Museum under snow, was chosen by Watford Mayor Dorothy Thornhill in her Christmas Card competition. 1000 cards are annually printed and sent out by Mayor and the card raised over £2,000 for charity.

Commissioned work is hung in Watford's twin towns of Mainz, Germany and Pesaro, Italy. Privately purchased work has found its way to many parts of the world, including: France, Switzerland, Dubai, Canada, the U.S.A, the Czech Republic, Pakistan and Columbia.