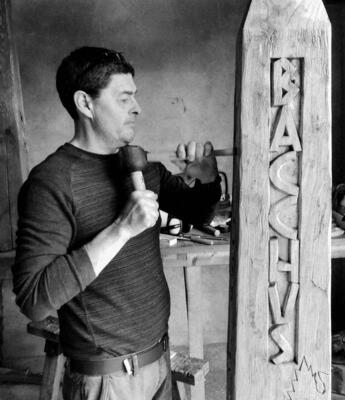 I will be taking part in Open Studios from 10th September.

I have had a lifelong interest in the arts, cultural heritage and the crafts but it wasn’t until 2006-07 when I completed a full-time course at Roehampton University Calligraphy and bookbinding that I seriously considered a career in these areas.
During 2008, I had an informal apprenticeship with the letter carver Tom Perkins, learning how to draw letters and cut them in stone. From 2008-11, I studied at the University of Hertfordshire, gaining a BA with First Class Honours in History. At the same time, I continued developing my skills as a letter carver, visiting other craftsmen’s workshops and gaining my first commissions. On graduating in 2011, I set up my own business as a self-employed letter carver.
From 2011-15, I worked on cataloguing the archive of the craftsman Michael Renton for the Edward Johnston Foundation and I also became the librarian and archivist for the Society of Scribes and Illuminators.
In 2018, I completed an MA by research in History at the University of Hertfordshire. In October 2017, I became a fellow of Digswell Arts Trust and had studio at The Forge in Digswell, Hertfordshire, until July 2020, when I moved to Parndon Mill, Harlow. I mainly work to commission, creating pieces of public art, memorial stones, birdbaths, benches, plaques and stones for the garden. I also teach and lecture on calligraphy and letter carving, running workshops and short courses. In the spring of 2018, I ran letter carving workshops at Highfield School Letchworth.

If you would to contact to enquire about a commission, you are very welcome to visit me at my workshop. Please contact me to arrange an appointment.
Simon Langsdale Letter carver, Parndon Mill, Parndon Mill Lane, Harlow, Essex. CM20 2HP
Tel no. 07701 027042
email: simonlangs@hotmail.co.uk