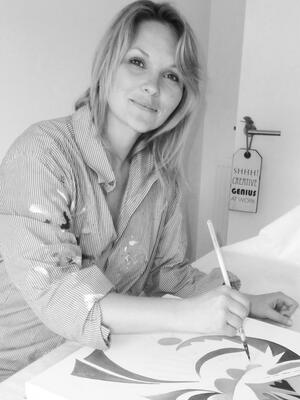 Amy is a commission artist from Welwyn, Hertfordshire and graduated in 2005 with a BA Hons in Fine Art from De Montfort University, Leicester. With a full-time career in the world of Publishing, Amy endeavored to pursue her love of acrylic painting in her spare time.

Working as a commission artist since 2002, her portfolio is varied and exciting. Amy loves the personal touch of working on commissions where a painting is uniquely developed for a special gift or to brighten a wall in the home and compliment interior colours.

Amy has developed her own unique signature style in vibrant abstract paintings and her playful compositions have been compared to one of her favourite artists, Kandinsky. Amy finds colour in everything. A slight hint of lilac in the dullest concrete turns to bright purple. She says: "I want each colour to have its moment and guide your eye around the painting. Most of all, like Kandinsky, I want the colours I use to sing and bring joy to the viewer."

Her paintings started to become popular from her 'London Series' that began in the exciting Olympic Year of 2012 and she continues to add favourite scenes from our beloved capital. With artwork shipped around the UK, Europe and even as far as America and Canada.

Amy was a graphic designer for many years which seemed to encourage her style with precision and graphic elements. Each year her paintings are changing and developing into new ideas but I all series are still recognisably hers.

She works by sketching a subject matter, then reduce the sketch to simple lines and shapes and extend areas to form movement and add decorative and fun shapes. Like finding picture in the clouds, Amy likes that the viewer discovers more each time they look at her paintings.

In 2013, Amy was approached by Helen Meissner to sponsor a Folkstock Music Festival. With her graphic skills Amy was able to create a Folkstock logo based on her largest paintings to date from her Music Series 'Piano'. This now recognised logo and imagery has been on stage backdrops, t-shirts and even on cakes at Folk events. Plus, Amy has developed imagery from her paintings for music album and single covers for local Folk musician.

In June 2014, Amy had her first solo art show in her hometown Welwyn, during the 40th Village Festival. In Feb 2017, Amy had a very successful second solo art show ‘Hart Stag’ of our beloved Hertfordshire emblem. This ran for three months at the Hertford Tourist information Centre, Hertford. This venue still sells her stag prints and cards, PLUS the council licensed four of her stag paintings as imagery to go on tourist gifts for the year; mugs, coasters, placemats and cushion covers. In September 2018 Amy had her third solo art show ‘Amy’s Petting Zoo’ a mix of all the animals at the Radlett Centre, Radlett.